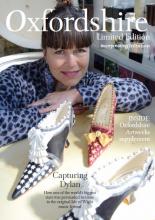 December 2016
From the courtroom to a hospital corridor, former Oxford barrister Rob Farrands turns his talents to photography.
Artweeks photographer builds on May's success with a new exhibition 'Rivers of Life' at the John Radcliffe until the end of February.
Spectacular Glass Sculptures come to Oxford
The Oxford Times takes notice of the Artweeks exhibition in the Oxford University Museum of Natural History
The Circus at Christmas
The art of the circus and the twelve days of Christmas
Oxford Glistens in Gold
Be astounded by gold- and silver-smiths exhibiting this month in Oxfordshire's only dedicated contemporary jewellery gallery.

November 2016
Midnight temptation in Woodstock
Artweeks hat-maker Lizzie Hurst wins the Guild prize at Oxfordshire Craft Guild's annual Christmas exhibition.
Artweeks in Winter
The OX Magazine looks at the story of art - the story of its inspiration, its creation and its discovery here in Oxfordshire.
Artweeks gets crafty for Christmas
The Oxford Times Limited Edition magazine previews some of the exhibitions in the Artweeks Christmas season.
View the local Christmas Season
The Banbury Guardian looks at the Artweeks events taking place in and around Banbury this autumn.

August 2016
Celebrating The Human Form
As the Olympics kick off in Rio, the OX magazine celebrates varied representations of the human body with Oxfordshire Artweeks artists.

March 2016
Off the Beaten Track
Cotswold Life magazine previews some of the Witney artists involved in this year's Artweeks (and one regular who is having this year off!)
Recognition for Banbury Artist in National Business Awards
Artweeks newcomer Ella Hendy arrives on the Banbury art scene with aplomb!

February 2016
A celebration of international art in Oxford Meet the Oxfordshire Artweeks artists representing Oxfordshire at the Oxford International Art Fair.
Shells are the sea's jewells says expert Ingrid Thomas Meet acclaimed conchologist Ingrid Thomas whose unusual Artweeks exhibition is inspired by sea shells.
Artist Jan Harvey opens her studio and The Garden Gallery for Artweeks Part of the Shipton-under-Wychwood offering is featured in the Wilts & Gloucs Standard.
Sculptor carves out a new body of work after studio fire for exhibition Garford's Beatrice Hoffman explains to the Didcot Herald how a studio fire been integral in the preparations for her Oxfordshire Artweeks exhibition.

October 2015
The Thames in Textiles
A group of textile artists are inspired by the 'liquid' history flowing through the county.
Wantage, Words and (not just) Betjeman
Read about the beauty of words, celebrated in an exhibition of recent illustrations by lettering artist Lin Kerr.

June 2015
The Colours of Summer.
The OX Magazine looks at the Gods of Colour in the Ashmolean and the local artists inspired by gardens.

May 2015
Oxford Times Limited Edition Artweeks Supplement.
Twenty pages of glossy feature articles about a surprising range of Artweeks artists and their work, from ceramic shoes to model boats, and even hear how concrete can surpass marble for beauty (yes, really)!
The Magic of Artweeks.
OX Magazine offers some ideason where to start with Artweeks visiting.
Art that's Good Enough to Eat.
OX Magazine looks at the breadth of art inspired by delicious dining!
Fairtrade Goods become Works of Art for Show.
The Oxford Mail & other local papers report of St Michael at the Northgate's exhibition for Artweeks.
Students' Nature-inspired Artwork put on Display.
The Oxford Times look at an Artweeks exhibition put on by Wood Farm Primary School in Headington.
Photo Exhibition Highlights the Work of Farm Volunteers.
The Oxford Times reports on the FarmAbility exhibition in Wytham.
Artists Open Their Studios to the Public This Week.
The Herald Series (Didcot, Wantage & Grove, Wallingford and Abingdon) looks ahead at South Oxfordshire Artweeks.
Profile: Frances Brann - Art Inspired by Travelling.
An in-depth interview with Artweeks arctic painter from Burcot, Frances Brann.
Things to do this May Bank Holiday Weekend.
A recommendation to come Artweeksing in The Telegraph!

April 2015
The Sea at Oxfordshire Artweeks
A feature about the Artweeks April exhibition,bringing a coastline to Oxfordshire!
Get Prepared for Oxfordshire Artweeks.
Some ideas about starting to plan your May visiting, from OX magazine.
Antonia Bruce at Art Jericho.
A review of dancing cyanotype cornstalks in this forthcoming Artweeks exhibition.
Artweeks is 'a treat'.
For Art's Sake column coverage in The Oxford Times.
Studio doors open as city celebrates its art.
The Oxford Mail gives a quick overview of some of the exhibitions in prepartion for Artweeks.
Artists open their doors for Artweeks.
The Banbury Guardian looks ahead as Artweeks approaches.
All the art for everyone.
Anne James takes a look at the vast range of art on offer around the county at this year’s Artweeks event.
An introduction to Artweeks in The Oxford Times.
Esther Lafferty, Festival Director of Oxfordshire Artweeks, encourages you to visit artists from textile designers to ceramicists.
Melanie Charles brings Mooving Pictures to Artweeks.
Stuart Macbeth meets an Artweeks debutante whose chosen field is paintings of cows.
A Profile of Philip Koomen, the Professional dreamer.
An in-depth interview with Checkendon's Artweeks furniture designer-maker Philip Koomen.
Home is where the art is.
The Banbury Cake previews Artweeks as its doors open in the North of the county.

March 2015
The Natural World Awakens
A look at rural Oxfordshire as it pushes into spring.
Art for all to enjoy.
A peek at what's coming in the Banbury Guardian.
High Tides reaches our Shores.
A look at the Artweeks april exhibition 'Oxford's Sea View' in the Oxford Mail.

February 2015
The Magic of the Artist's Studio
A reflection on the secret spaces in which the creative process takes place.
Artist's Books: Each a Minature Gallery
Turn the pages of three Oxfordshire artists and hear their stories.

January 2015
In the Bleak Midwinter
A look at two Artweeks artists who are inspired by cold and inhospitable environments.

You can also view our 2014 media coverage archive.