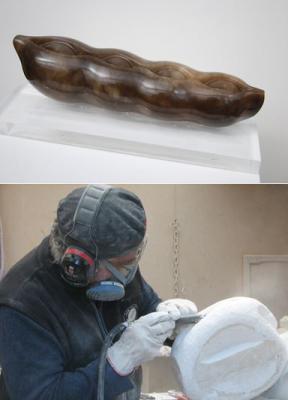 This week, amongst other appointments, I visited a tranquil and mystical garden tucked away in darkest Headington, where a workshop lies deep in stone dust from which mythological furies are emerging. They’re a new series of work by sculptor Martin Smith whom the Artweeks board has just been awarded the 2013 Mary Moser prize, an award established in 2003 to mark the work of an Artweeks artist who has taken up art as a second career later in life.

A child in Bradford, Martin discovered Henry Moore as a young teenager and decided then and there that he’d like to become a sculptor. It has been a long journey via a career in academic publishing and so we're delighted to now recognise Martin's achievement of this dream fifty years later.

Inspired by the human form and shapes in nature Martin crafts his work from lumps of marble, alabaster, soapstone or other rocks, transforming large hunks of stone into tactile sculptures rich with organic colour, pinks and reds, ochre and sand, brown and green, or translucent in the sunlight. His sculptures are heavily influenced by the beauty of the female form; others are abstract or botanical, with pods and seeds figuring largely.

‘You can’t impose a fixed idea on stone,’ Martin explains to me, 'as you have to work with the softer and harder seams within a piece so it’s rather a two way process.' The shape of the sculpture evolves slowly therefore but it’s clearly worth it because once completed a marble statue can last for several thousand years. This is certainly art to keep!!

And I discovered too that stone carving isn’t an artistic pursuit for the faint-hearted: Martin’s sculptures vary widely in size and form, and can weigh as much as 120kg or more so he’s a regular at the gym just to be able to move some of them!
‘I learnt about the need to keep fit the hard way’ laughs Martin. ‘I left a work-in-progress on a bench seat in the back room when I went on a relaxing holiday for a couple of weeks and when I came back I couldn’t lift it anymore! I also once had 10 tonnes of Rajasthan marble delivered to the house by lorry all the way from Tuscany and when the lorry arrived without a lifting arm, there was no way I was going to be able to get the marble slab into the garden. I had to call in emergency help from a local stone merchant and even then the closest ones didn’t have the equipment I needed.’

With £100 of prize money coming his way, I ask what Martin plans to spend his prize money on - a third art space! With a workshop for the dirty work in the garden and an attic studio for life drawings, and wax and clay modelling, Martin's now renovating a second 'studio' in the garden for casting bronze – a double challenge, as he’ll not only plans to start more bronze works but also because this workshop will need to be dust-free! A feather duster for Christmas would surely be a good start?