A celebration of Art (Oxford Times 5th May 22) | Oxfordshire Artweeks 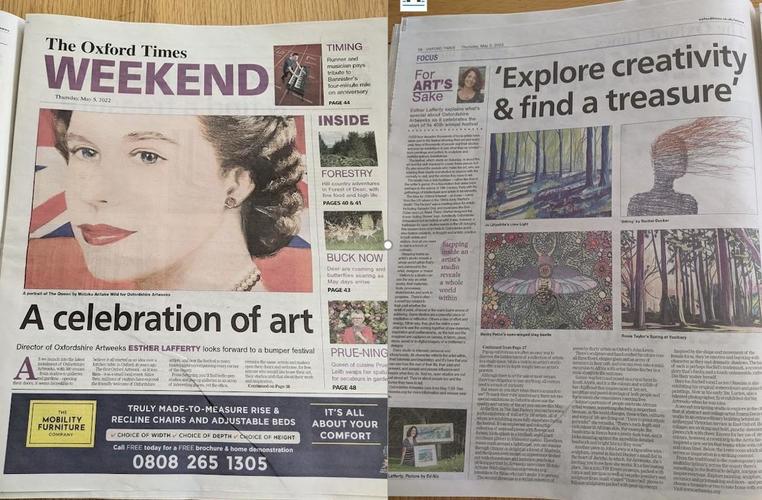 The fortieth Oxfordshire Artweeks begins this Saturday (runs 7th-29th) adding life and colour to nearly 500 venues across the county throughout May. As the festival celebrates 40 years, Festival Director Esther Lafferty explains what it’s all about and picks 4 venues that offer a snapshot.

The festival started as an idea at a kitchen table in Oxford over forty years ago and the first Oxford Artweek – as it was then - was a small local event. Since then, millions of visitors have enjoyed the friendly welcome of Oxfordshire artists, and now the festival is many times bigger encompassing every corner of the county. Today you’ll find both open studios and pop-up galleries in an array of interesting places, yet the ethos, remains the same: artists and makers open their doors and welcome, for free, anyone who would like to see their art, their studios and chat about their work and inspiration. Pop-up exhibitions are often an easy way to discover the hidden talent of a collection of artists in a single space, whilst a visit to an artist’s studio can offer a more in-depth insight into an artist’s practice. Although there is art for sale at most venues, there’s no obligation to buy anything: all visitors need is a touch of curiosity.

But where do you start when there’s so much to see? To mark their ruby anniversary, there’s are two special exhibitions in Oxford to showcase the quality and variety of the art you can see this May (Artweeks venues 1 & 2). At the first, in The Jam Factory, you can browse a joyful exhibition of wall art by 100 artists, all of whom are exhibiting more fully elsewhere during the festival. It’s an exuberant and colourful collection of seasonal pieces with flowers and forests; birds splash in a birdbath and a giant minibeast glitters in irridescent mosaic. Elsewhere, waves smash around a lighthouse, you can wander through Otmoor or delight in a forest of bluebells, and the Queen even makes an appearance decked out with rhinestones and imitation pearls in a striking portrait by Artweeks newcomer Motoko Aritake-Wild. (This show continues on-line at www.artweeks.org/latestshow for those who can’t make it in person.)

The second showcase is a stylish selection of pieces by thirty artists in Oxford’s John Lewis: there’s sculpture and hand-crafted furniture over all three floors, elegant glass and an array of ceramics in their café, and you can even take a mini-excursion to Africa with artist Sabine Barber in a nook alongside the suitcases! Sabine was born and raised on a rural farm in South Africa, and it is the colours and wildlife of her childhood that inspire most of her art, paintings and pastel drawings of both people and the animals she remembers roaming free. “Elephants are great to paint because they’re very expressive, and lions too, but leopards are my favourite. They are so sleek and streamlined and they have such beautiful eyes - some have blues eyes and others have amber or green – and I love the way they sleep in the trees. They seem so lazy in the branches that you’d never guess from looking at them at rest that they could rip you apart. Their markings are amazing and because of their different spots, each leopard looks very distinct.”
Sabine’s portraits of people celebrate African tribal women, something she feels is important because, as the world changes, these tribes, cultures and ways of life are dying out. “I love to paint ethnic portraits!” she remarks, “There’s such depth and rich colour in African skin. For example, the Samburus in Kenya have a lovely dark tone, and it looks amazing against the incredible detailed beadwork and bright fabrics they wear.”

Another piece in John Lewis is a figurative wire sculpture, created in Rachel Ducker’s small flat in the heart of Jericho, to which, for Artweeks, she’s inviting you to see how she works. It’s a fascinating place, like a mini Pitt Rivers museum, packed with curios and intrigue as well as bespoke jewellery and sculpture from small winged ‘Tinkerbell’ pieces to full-size sculptures packed with pent-up energy. Inspired by the shape and movement of the female form, they’re emotive and bursting with character as they cast dramatic shadows. The hair of each is perhaps Rachel’s trademark, a crowning glory that’s funky, and a touch untameable, rather like their maker herself. Here too Rachel’s son Lucien Ohanian is also exhibiting his original watercolours and gouache paintings. Now in his early 20s, Lucien, also a talented photographer, first exhibited during Artweeks when he was nine.

A second intriguing studio to explore in the city is that of abstract and collage artist Emma Davis who works in an extraordinary building behind an archetypal Victorian terrace in East Oxford. ‘When we moved in, we stripped the deteriorating wooden cladding off a two-storey Victorian building in the garden and uncovered the most amazing stained glass windows beneath – a series of six which light up the space magically,” she says. “It’s incredible to think that they’ve been hidden for decades. This isn’t the sort of house which you’d expect to have stained glass in a garden out-house and it felt like finding treasure!’ Emma now uses the upper storey of this building as her studio. Her collages are striking and bold, punchy statement pieces rich with cheer. Known for her use of strong colours, however, a recent trip to the Arctic has inspired a new series that teams white with colour and clean lines. Below, the lower room which also serves as inspiration is a striking contrast. Its walls are packed with neat shelves of memorabilia from her childhood and characters she’s gathered since – from Playmobil characters to a four-foot ET, Buzz Lightyear and a teletubby.

From the traditional to the contemporary and multidisciplinary, across the county there’s something in the festival to delight, intrigue and inspire everyone. Explore painting, sculpture, ceramics and printmaking; look out for fashion and furniture; discover glass art, mosaics and other marvels; and perhaps choose a treasure or two to take home with you. For more information visit www.artweeks.org