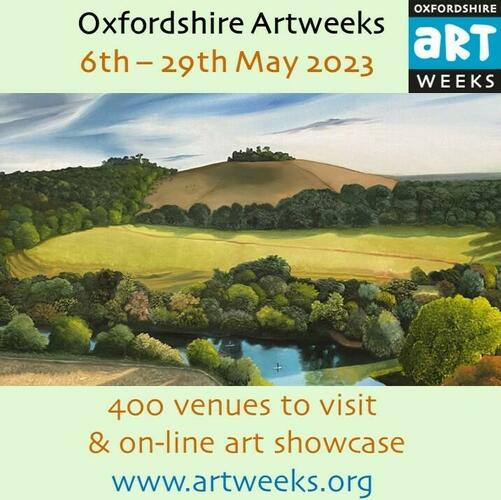 Oxfordshire Artweeks is the UK’s oldest and biggest open studios and pop-up exhibition event, and the 41st festival, which is in the planning for spring 2023 promises to be fit for a king.

As the country’s creatives open their doors to welcome visitors, for free, there’s a wealth of art and intrigue to explore in hundreds of studios, galleries, gardens, potteries, churches, woods and other fascinating venues including the Bibliographical Press in the Old Bodleian Library and the National Trust Heritage and Rural Skills Centre in the Cotswold village of Coleshill.

During the festival, as many as 2000 artists, ceramicists, sculptors, jewellers, furniture-makers, milliners and more than 200 new exhibitors will be presenting over 500 shows at nearly 400 different locations. They will be showcasing their creative talent, explaining their materials and, often, demonstrating their methods. Visitors will be able to see, touch and talk about hundreds of thousands of pieces of art and craft and uncover the stories of their inspiration. The art on show both celebrates iconic Oxford views and local landscapes and promises a global journey through the eyes of local artists who have been influenced by people and places around the world and the colours, fabrics and styles of exotic destinations. Explore a five-acre sculpture park in the Cotswolds and take an art trail through the towns of Woodstock, Watlington and Wallingford, or tour America on a motorbike, go on safari in Tanzania, and be enchanted by Rajasthan.

The festival opens on 6th May as the country celebrates the coronation of King Charles III, and at dozens of venues you’ll find celebrations and art that pays homage to a new era. Discover tiaras and palaces, kingfishers, King Charles spaniels, and the occasional touch of subversion too.

Visitors can also expect the unexpected as they discover handcrafted rocking horses, bellows and boats; technology-assisted art and stunning microscopy images relating to medical research; satirical commentary on today’s society & a goat with a pearl earring.

Image on e-flier is a painting by Jayne Ford, venue 100, Crays Pond, Goring-on-Thames, itself based on aerial photography by Hedley Thorne, exhibiting at the Earth Trust Gallery
www.artweeks.org/v/jayne-ford
www.artweeks.org/v/earth-trust-gallery

Notes to editors
Oxfordshire Artweeks www.artweeks.org 6th-29th May 2023
The Artweeks festival is Oxfordshire’s largest visual arts festival and the UK’s oldest and biggest artist open studios and pop-up exhibitions event. In May each year, it is a three-week not-for-profit celebration of the county’s artistic and creative talent encompassing the visual arts in their broadest sense. Around 2000 artists, makers and designers open the doors to their homes and studios or take part in pop-up exhibitions and welcome the public to see their creations and watch them work –over 100,000 people visit Artweeks exhibitions each year and a million pounds of art changes hands!