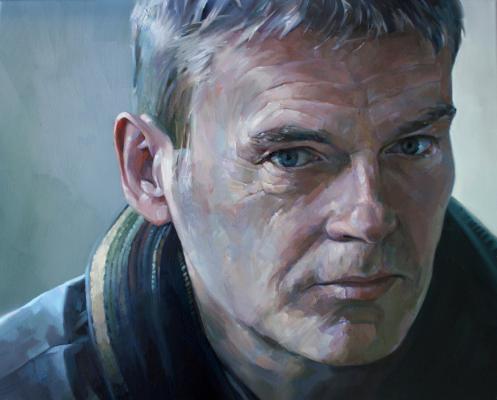 Oxford’s Mark Haddon is internationally known for his award-winning book The Curious Incident of The Dog in The Night Time, a series of other popular novels and a more recent foray into short stories The Pier Falls. He is also a talented artist, painter and print-maker and throughout March he is co-presenting an exhibitions of portraits in The Jam Factory Art centre, Oxford alongside acclaimed portraitist Tom Croft who lives in Wolvercote and with whom he became friends at the school gates as they collected their respective children.

Whereas Croft’s work is ‘painterly’ with passionate brush strokes in bold colourful oils to capture a person’s spirit and bring the face alive, Haddon’s portraits appear more measured and precise giving both a representation of the person and clues to the life they lead.

‘I’ve never been commissioned to paint or draw a portrait,’ says Mark, ‘I simply choose people and ask them if they’d mind, and then I give them the portrait, or a print of it, if they like it. I choose my subjects because I like the person, I like their work and I like their face, or some combination of those things: some are friends and others are people I’ve approached out of the blue.’

Alongside artists, academics, family members and everyday people who have mattered to him, the show includes portraits of eight writers, including novelists Sunetra Gupta and Molly McGrann, two poets, Summertown’s acclaimed children’s author Ted Dewan and Simon Stephens, the playwright who adapted The Curious Dog for stage and so it’s the perfect diversion for visitors to Oxford’s Literary Festival.

Croft’s portraits span personalities including BBC Art correspondent Will Gompertz, Loz Colbert from Ride, Colin Greenwood from Radiohead and, after a trip to Africa last year, Octopizzo an award-winning Kenyan hip hop artist who grew up in Kibera, the largest slum on the continent.

Mark Haddon is the author of the bestselling novels The Red House, A Spot of Bother, and the global phenomena The Curious Incident of the Dog in the Night-Time which won the Whitbread Book of the Year Award and the Los Angeles Times Book Prize for First Fiction and is the basis for the Tony Award winning play which returns to Oxford this May. He is also the author of a collection of poetry, " The Talking Horse and the Sad Girl and the Village Under the Sea” and a new book of short stories The Pier Falls. He has written and illustrated numerous children’s books, and has won awards for both his radio dramas and his television screenplays. He lives in Oxford.
www.markhaddon.com

Tom Croft is a portrait artist who has been commissioned to paint public figures including David Beckham and Wayne Rooney for Manchester United and Bishop Libby Lane, first woman to become a Church of England bishop who became the first woman to hang on the walls of the hall in St Peter’s College, Oxford. He paints in a garden studio in Wolvercote, Oxford, which he opens to the public each year as part of Oxfordshire Artweeks.
www.thomascroft.co.uk