Experience the colour & life of India without leaving Oxford! | Oxfordshire Artweeks
Submitted by Esther Lafferty on Tue, 10/02/2015 - 10:43am 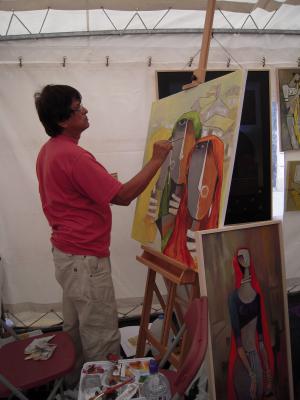 Painter Kamal Koria from Barrington Close, Headington is the proud winner of the 2015 Mary Moser Award, an annual award established to help develop the career of a professional artist who has taken up art as a second career later in life. It’s the second time in two years that this award has been won by a Headington artist.

Kamal Koria shows his paintings from his family home during Artweeks each May. His work is strikingly composed, bursting with life, and often stylized, rich with the colours of an Indian childhood. Inspired by the vibrant Indian culture, they poetically capture both a timeless simplicity of human nature and the nostalgia of his childhood memories.

Kamal Koria was born in the small town of Mangrol, Gujarat in western India and his childhood was spent in a close-knit family, and amongst street life with friends causing mischief and enjoying considerable freedom. Despite missing much of his schooling through non-attendance; he received a first class degree from the CN College of Fine Arts, Ahemdabad, Gujarat, and began a career as a graphic designer, moving to the UK at 27.

Koria became as one of the leading Asian Graphic designers in the country, responsible for the iconic image on Jalpur Mill food packaging, and popular for his Diwali cards, Asian wedding invitations and even bhangra record cover designs! His talents reached royalty when he painted a portrait of the late Princess of Wales which was given to her during a visit to clothing manufacturers TW Kempton in Leicester in 1984.

Thirty years on, Kamal appreciates the freedom that retirement has given him, spending time with his grandchildren in Headington and creating works for his own fulfillment to build portfolio of contemporary paintings as he continues to experiment, learn, research and explore his ideas and memories. He looks forward to sharing them with visitors during Artweeks.

Kamal Koria is hosting an Artweeks exhibition in Headington (venue 143) from 9-17 May and throughout May there will also be a number of pieces of his work in the O3 Gallery (venue 198) alongside an exhibition of contemporary art created using traditional craft techniques.