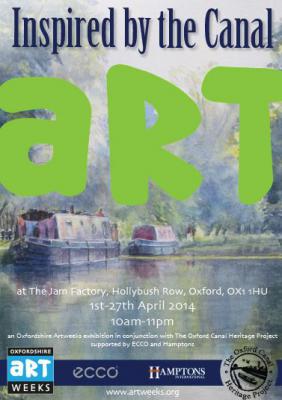 The first daffodil has popped its golden head up on my lawn, defying the morning chill and proudly announcing the onset of spring. Do you, like me, fancy a stroll in the wintery sunshine?

And if you’re in Oxford, where better to head than the canal, an often overlooked waterway, lush with greenery and soaked in serenity. Here in the Artweeks office, we’re pulling together the final details for our April exhibition ‘Inspired by the Canal’ in The Jam Factory, with paintings, prints and photographs by several professional artists alongside a thought-provoking installation by contemporary artist Sarah Mayhew Craddock. (http://sarahmayhewcraddock.com/musings).

Photographer David Willoughby explains how he has found putting together a series of images of the canal quite a nostalgic experience. Having grown up near the canal, he spent many summers exploring and adventuring along the waterways, from losing his ' Action Man' to its murky depths (all in the line of duty) to seeing how many of us could fit in a dinghy. Now a landscape photographer, he finds himself drawn back to the water. While he love shooting seascapes and waterfalls for their obvious natural beauty, canal photography provides great contrasts and textures to work with as many of the old houses and factories still line the canal sides, eroded and stained where the water has left its mark and he records the the marriage of man made materials and the natural flow of the water, which combined gave the canal its raison d’etre in a byegone era.

I’ve also been talking recently to David Parker-Woolway, a West Oxfordshire photographer who is hard at work preparing for his Oxfordshire Artweeks exhibition in Faringdon’s Old Town Hall this spring.

In these days anyone who is anyone has a camera phone and can send digital images of themselves and the view from their holiday balcony to hundreds of friends around the world in an instant. While many of these are mere snap-shots, most avid digital cameras users can on occasion capture a truly striking scene, and as teenagers by their thousands use their everyday pictures to record their perceptions and emotions and share them with others, what’s the future for art photography?

Parker-Woolway’s response to this deluge of digital imagery is the painstaking construction of incredible photographic panoramics, each composition a week’s work, building several hundred images of the same place in different lights, from different perspectives and different distances into a representation of the original landscape or iconic building, such as the Radcliffe Camera. And interestingly, these cubist alternative visions, these manipulations of reality contrast so strikingly with the seamless panoramic images digital photography has made so easy, may be a truer representation of how we see things.

The popularity of digital photography has made snapshots of famous landmarks and views ten a penny. But how often do you actually see that perfect tourist brochure image, the landmark clear against a blue sky without traffic and scaffolding, passers-by and a crisp packet on the breeze? Walking through the city centre or along The Thames for example, we actually see many variations of ‘the view’ as we pass by which our brain amasses into one memory, a place reconstructed rather than a perfect representation, with certain details which hold the eye emphasised more than others.

While Parker-Woolway uses photography as the starting point for the ‘photographic illustration’ of a scene, I’ve been thinking a lot about lomography, a style of experimental photography that dates back to the 1990s when some Austrian students, with a small and enigmatic Russian camera (the Lomo-CA, hence lomography) shot ‘from the hip’, almost mindlessly and often without looking through the viewfinder, with surprisingly striking results. Belying today’s trend to digitization, this analogue movement has grown rapidly: lomographical effects are in vogue, a stylized surrealism characterized by oversaturated colours and light leakage, optical distortions, unexpected prismatic effects, and other qualities traditionally avoided or corrected by traditional photographers.

I’m therefore excited to announce that for Artweeks, in April and May the O3 Gallery, the Old Fire Station and The Jam Factory in Oxford are hosting a series of exhibitions and workshops exploring and celebrating creative analogue photography and photographic practices which embrace low quality exposure (Lo-Fi), prioritising aesthetic effect over digital accuracy. It’s time to get up in the loft, slot a roll of film into that old camera and revel in serendipity – let’s see where it can take you.

And where better to start than with a canal-side walk?