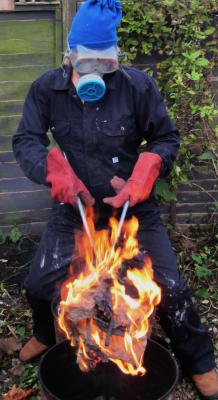 Oxfordshire Artweeks is delighted to announce that Oxfordshire artist Crabby Taylor is the winner of the 2011 Mary Moser prize, an award established in 2003 to mark the work of a local artist who has taken up art as a second career later in life.

Esther Browning, Executive Director for Artweeks, says “Crabby makes wonderful ceramic pieces in simple circular shapes including standing and open forms and tactile pebbles using various clays to give texture and colour. These are then fired at 1000°C in an old metal dustbin before being smothered in smouldering sawdust for several days. Crabby wears gauntlets, goggles and a respirator as protection from the heat and smoke and it is a laborious and often frustrating process: for every piece that reaches completion, six have fallen by the wayside from thermal shock!”

Crabby Taylor has previously had a varied carer including an apprenticeship at Dowty Rotal where Crabby Taylor’s father ran the experimental department for the propulsion of the Harrier Jump Jet; a study course under the flight path of Concorde; and global adventures in Hong Kong Sri Lanka, Thailand, Burma, China and Nepal. An Asian influence remains strong in Crabby’s work, alongside inspiration provided by The Ashmolean, The Pitt Rivers Museum and a childhood running wild in Laurie Lee’s Cider with Rosie country.

Since those days, spent climbing trees and building rafts, dams and fires, Crabby Taylor has been happiest outside under the stormy English skies. The stylish Raku ceramics for which this artist is now recognised are a recreation of those days playing with mud, fire and wood with fire in the Cotswold countryside.