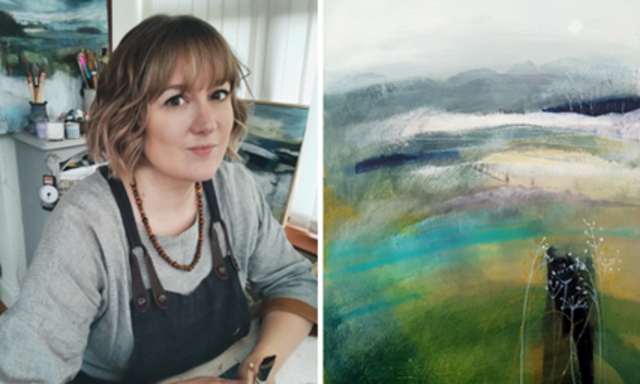 We are delighted to announce that Hook Norton artist Rachel Cronin is the winner of the 2021 Mary Moser prize for her evocative, ethereal, and sometimes unsettling, paintings of North Oxfordshire. The award was established in 2003 to mark the work of a local artist who has taken up art as a second career later in life. Rachel worked first in retail as a bookseller and then in administration and adult education before taking the plunge into art full time.

“When I was small, I always wanted to be an artist (apart from the summer I wanted to be Alexis Colby in Dynasty), and in every picture of me as a child, I am holding a paintbrush,” says Rachel.

“I’ve always been drawn to landscapes, seeking out forms, patterns and colours. It’s the countryside that inspires me most and I love the rolling land of North Oxfordshire, woods and trees, and lesser-known spots. I love picking out the man-made elements like gateposts and fences and evidence of ancient ways of life.”

“I have long been fascinated by history, and its strange stories in particular. As a child I had a book on the myths and legends of the British Isles and it was very well thumbed, especially the section on Banbury and North Oxfordshire! I’m rather a magpie, collecting snippets of history and tales that catch my attention. I suppose it’s the same kind of approach I have to looking at the landscape!”

“I particularly love the Roman Road from Shutford to Broughton Castle. It’s very flat and straight with some great wide views and passes through little farms and by pretty babbling brooks. Or from Whichford Hill, there’s a wonderful rolling view down to Hook Norton beneath massive skies and, standing at the top, you get such a sense of distance and of the vastness of the land as field patterns stretch into the distance, and of time too, and centuries past. I pass by a spot called Traitor’s Ford on one of my favourite circular walks and always wonder why it is known as that: one theory is that the name was originally Trader's Ford because of its position on an old trading route, whilst other people suggest a traitor was hung here during the civil war after the nearby Civil War battle of Edgehill.”

And it’s that haunting sense of intrigue rooted in timeless landscapes which Rachel captures so beautifully in each of her paintings.

Rachel Cronin is holding an exhibition of her work alongside jeweller Jane Griffiths as part of Oxfordshire Artweeks in May.
The exhibition will run from 1st-9th May at 32 Bath Road, Banbury OX16 0TP (venue 5).