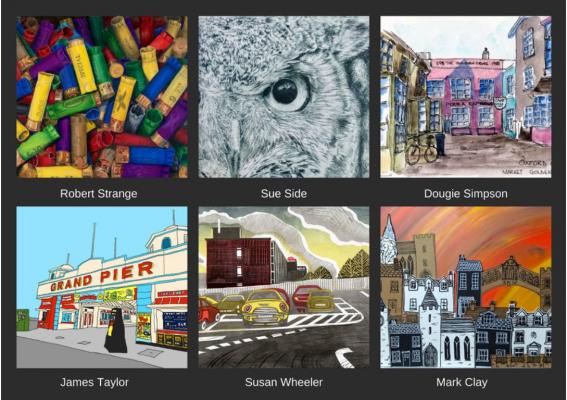 We’re now only weeks away from Oxfordshire Artweeks which runs from 4th - 27th May.

The festival guide can now be picked up in libraries, in Oxford’s Blackwell Art Shop on Broad Street, in The Jam Factory which is a stone’s throw from Oxford railway station or at local information points across the county. Alternatively, you can download the .pdf here, browse hundreds of pictures in the Artweeks’ artist on-line galleries here or print off local area trail maps here to make you choice. On social media, find us using the #oxfordshireartweeks hashtag.

And if you’re chomping at the bit to get started, read our April newsletter for three places you can have a sneaky preview of some Artweeks artists and events – Bampton, Oxford and Radley.

In Oxford, in the Arts at the Old Fire Station Gallery (until 11th May) the LiterArties, a multi-talented group of published authors and exhibiting artists, capture their creativity in many modes and mediums. Their art, influenced by people and landscapes both near and far, draws on contrasting backgrounds, cultures and experiences. “Draw a story in lines, plot its progress in oils, and bring the conflict to a head with brush strokes.” says LiterArties member Kamal Lathar, and each of the group tells their tales in different styles.

At Radley College’s Sewell Gallery’s ‘Mathematics and Imagination’, there’s a chance to get involved in an exhibition of interactive and kinetic sculpture by sculptor Willow Winston who uses welded metal to explore structures rooted in mathematical form. She is also inspired by the Periodic Table which celebrates its 150th anniversary this year.

We also invite you to join us at the Jericho Artweeks lecture with support from Oxford Art Society, a talk on The Mystique of the Studio and the World Within by Artweeks Festival Director Esther Lafferty (7.30pm, Tuesday 7th May, St Barnabas Church, Cardigan Street, Oxford OX2 6BG; free, arrive early as places can’t be pre-booked).

This is our 37th year, and this year Artweeks contemporary glass artist Vital Peeters celebrates opening his studio for the 30th time! You can read all about him – before going to visit – here, as published this month in the glossy magazine OX Sylva.