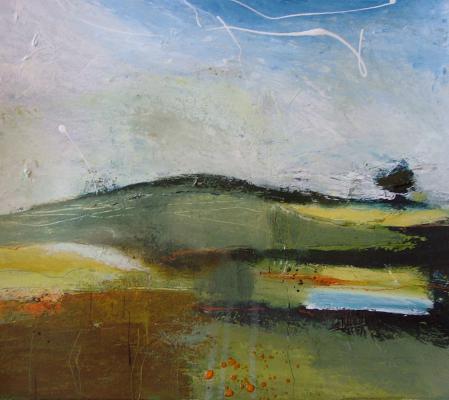 Oxfordshire Artweeks are delighted to announce that Banbury artist Caroline Chappell is the winner of the 2016 Mary Moser prize, an award established in 2003 to mark the work of a local artist who has taken up art as a second career later in life.

Caroline spent many years as principal art teacher at The Warriner School in Bloxham Nr Banbury. “I loved working with the young people but teaching and raising a daughter left little time for my own art’ says Caroline. It wasn’t until I took early retirement that I was able to devote the time to develop my painting and make a profession of it.”

Caroline trained as a potter originally, a craft where she literally took the land in your hand, digging the clay out herself and creating art from the earth itself. Always interested in the landscape and the way human generations have left their mark upon it, Caroline later enrolled on an Oxford University Further Education course ‘Walking the Past’, a fascinating introduction into our local landscape, and Oxfordshire’s hill forts, henges and standing stones.

And now, working in the heart of a new eco-home that she designed herself around the life of a modern-day artist and using paint that include pigment ground from Oxfordshire stone, Caroline records the intangible ‘sense of place’ that springs from the prehistoric land beneath our feet, inspired by the ancient landscapes and the hidden traces of our past.

‘The surface of the land provides the clues to what has gone before,’ Caroline explains. ‘For example, you can see the ridges of ancient ridge and furrow agriculture picked out in stark contrast as the sun sets and the shadows lengthen. Standing alone, hearing the landscape as I sketch, I feel tiny, in comparison to the grandeur and enormity of these ancient views.’

An exhibition of Caroline’s canvases will be on show in Middleton Cheney’s Heseltine Gallery in April, and in her studio, Hamptons in Banbury and in Burford At Gallery for Oxfordshire Artweeks during May.