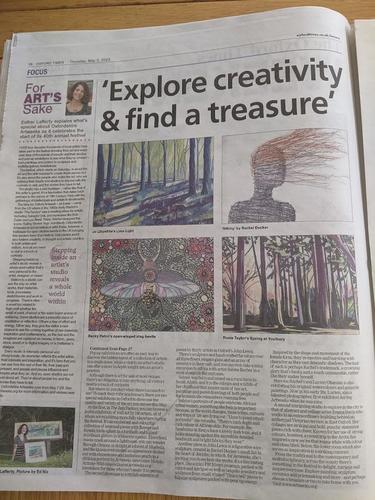 Esther Lafferty explains what’s special about Oxfordshire Artweeks which is celebrating its 40th festival this year.

Over four decades thousands of local artists have taken part in the festival showing their art and every year, tens of thousands of people visit their studios and pop-up exhibitions to see what they’ve created – from paintings and pottery to sculpture and multidisciplinary installations. The festival is about the art and the skill required to create these pieces but it’s also about the people who make the art, who are opening their hearts and studios to anyone with the curiosity to visit, and the stories they have to tell.

The studio has a real mystique – rather like that of the writer’s garret. It’s a fascination that dates back perhaps to the salons of 19th Century Paris with the gatherings of intellectuals and artists in Monmartre. The idea for Oxford Artweek – as it was – came from the US where in the 1960s Andy Warhol’s studio ‘The Factory’ was a meeting place for artists including Salvador Dali, and musicians like Bob Dylan and Lou Reed. There, Warhol designed the iconic Rolling Stones’ logo. Admittedly Oxfordshire Artweeks is not as radical or wild: it was, however, a trailblazer for open studios events in the UK bringing this modern form of art trails to Oxfordshire and it also fosters creativity, in thought and artistic practice in both artists and visitors. And all you need to visit is a touch of curiosity.

Stepping inside an artist’s studio reveals a whole world within that’s very personal to the artist, designer or maker: what is it, for example, that forty years after her death, the St Ives home and garden of Barbara Hepworth still draws nearly 50,000 visitors a year to see her both work and the place in which her working practice developed, the stone carving studio and yard which were at the heart of her creative life?

Visitors to a studio can see the way an artist works, their materials, tools, processes, sketchbooks and work in progress. There’s often a scent too related to their craft whether the small of paint, of wood or the warm burnt aroma of soldering. Some studios are a peaceful place of meditation or reflection. Others a hive of effort and energy. Either way, they give the visitor a rare chance to see the coming together of raw materials, inspiration and craftsmanship, as the real and the imagined are captured on canvas, in fabric, glass, stone, wood or in digitial imagery or a craftsman’s designs.
Every studio is intensely personal and idiosyncratic, its character reflects the artist within, their interests and inspiration, and it’s here that you can see how the rest of their life, their past and present, and people and places influence and inspire what they do. And so, open studios are not just about art. They’re about people too and the stories they have to tell over a cup of tea and a piece of cake: the Artweeks festival is as full of terrific characters and tales as a literary festival and it is also more beautiful aesthetically!

Oxfordshire Artweeks runs from 7th-29th May. See www.artweeks.org for more information and venues near you.